New! Library History video at  http://www.lisbonhistoricpreservation.com , click on videos and scroll down to Opening doors to Lisbon History.
Read how this library was established and how it has evolved to become such an important part of our community.

Lisbon Public Library is located in an historic storefront building in the heart of downtown Lisbon, Iowa. Our small library has popular print and nonprint materials for everyone and specializes in high-quality reading material for children of all ages. Computers and wireless internet are available for public use. The second floor of the library houses Lisbon Heritage Hall, the site of cultural programs that include concerts by world class musicians, theatre productions, student recitals and readings by local writers.

History of the Library

Lisbon’s graduating class of 1936 started a public library for their town as a senior project. The sixteen classmates went door to door with toy wagons, asking for donations of books and money.  The library was housed in several different buildings along the main street before it came to its current location in the Wink and Hauser building (built in 1875) at the corner of South Washington and East Main Streets.

The second floor of the library building was renovated in 1997.  Led by the library board of trustees, several local organizations—including the library, Southeast Linn Community Center, and the Lisbon History  joined forces to raise money for the project that restored a dark, dusty storage area to its former glory as a cultural center for the community.  The name Heritage Hall was chosen for the space because of its rich history during the last quarter of the nineteenth century.  When the Wink and Hauser building was new, the second floor served as a meeting place for city council, a concert hall for traveling musicians, a lecture hall and a home for social and literary clubs.

The original walls of Heritage Hall were covered with graffiti dating back to 1875, when the building was new:  signatures of city council members, local businessmen, musicians and other visitors; drawings, advertisements and other jottings.  During the renovation, much of the graffiti was covered by drywall, but several panels were left to display some of this informal history. 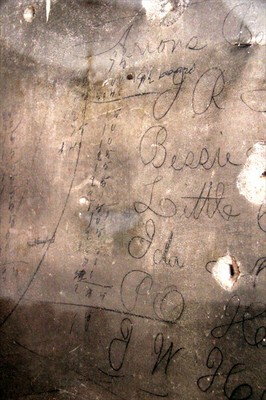 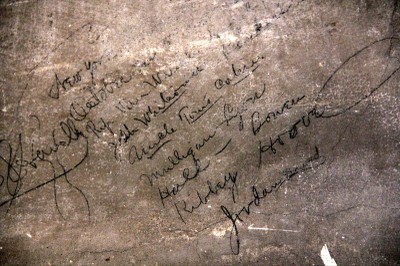